I have never owned a skirt which covers the knees and is not completely long as I always thought it shortens the silhouette and does not suit me. And even though I am a skirt/dress kind of person, the last time I wore a circle skirt was when I was 10. Under the retro vague I have seen several blogs where even petite sizes get to wear knee long circle skirts and I actually liked it. So why not trying? 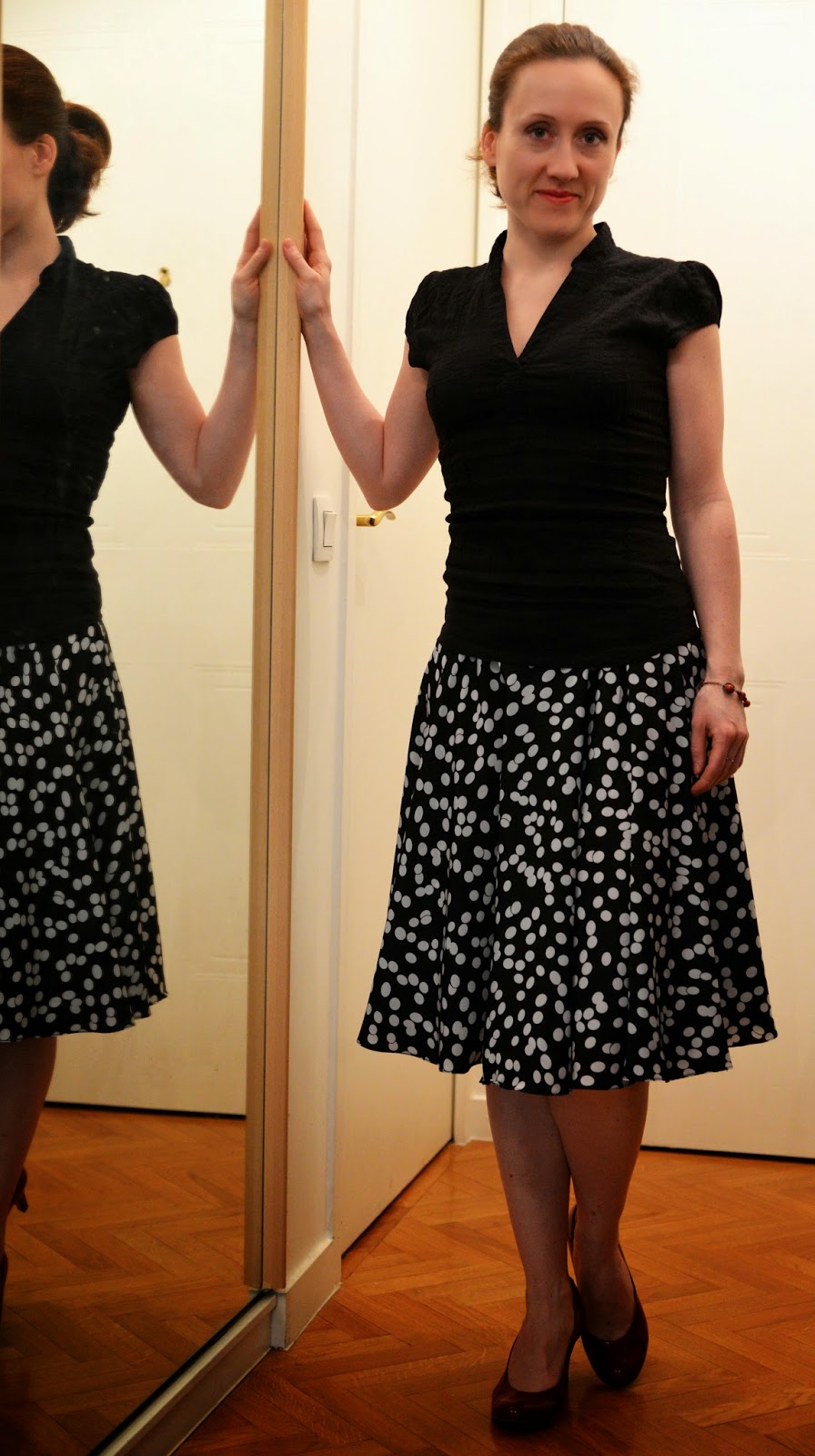 I was long hesitating whether to line the skirt or not.
To line:
The skirt might be electrostatic and get glued to my legs

Not to line:
The circle skirt would get too much volume
I would need 2m (!) of the black lining
I did not come up with a logical way how to attach the lining so that it remains invisible: either being it slightly shorter than the skirt, but then again, the electrostatics would not get completely solved or would get even worse, either sewn directly with the main fabric but with the quantity of material to be used I could not imagine making sure the lining would not be creasing or making problems.
I guess my final decision is quite clear :o)

This time, I have created my own pattern – only little geometrics needed - and as usually, had to cut about 10cm of the hem eventually to make sure the skirt finishes at the knee border. I guess I should start measuring more in the future before cutting anything.
The fabric is a very light polyester and I wanted it to be pretty also on the inside. For the two sides I used a French seam, which is probably larger than needed but quite nice in the end. 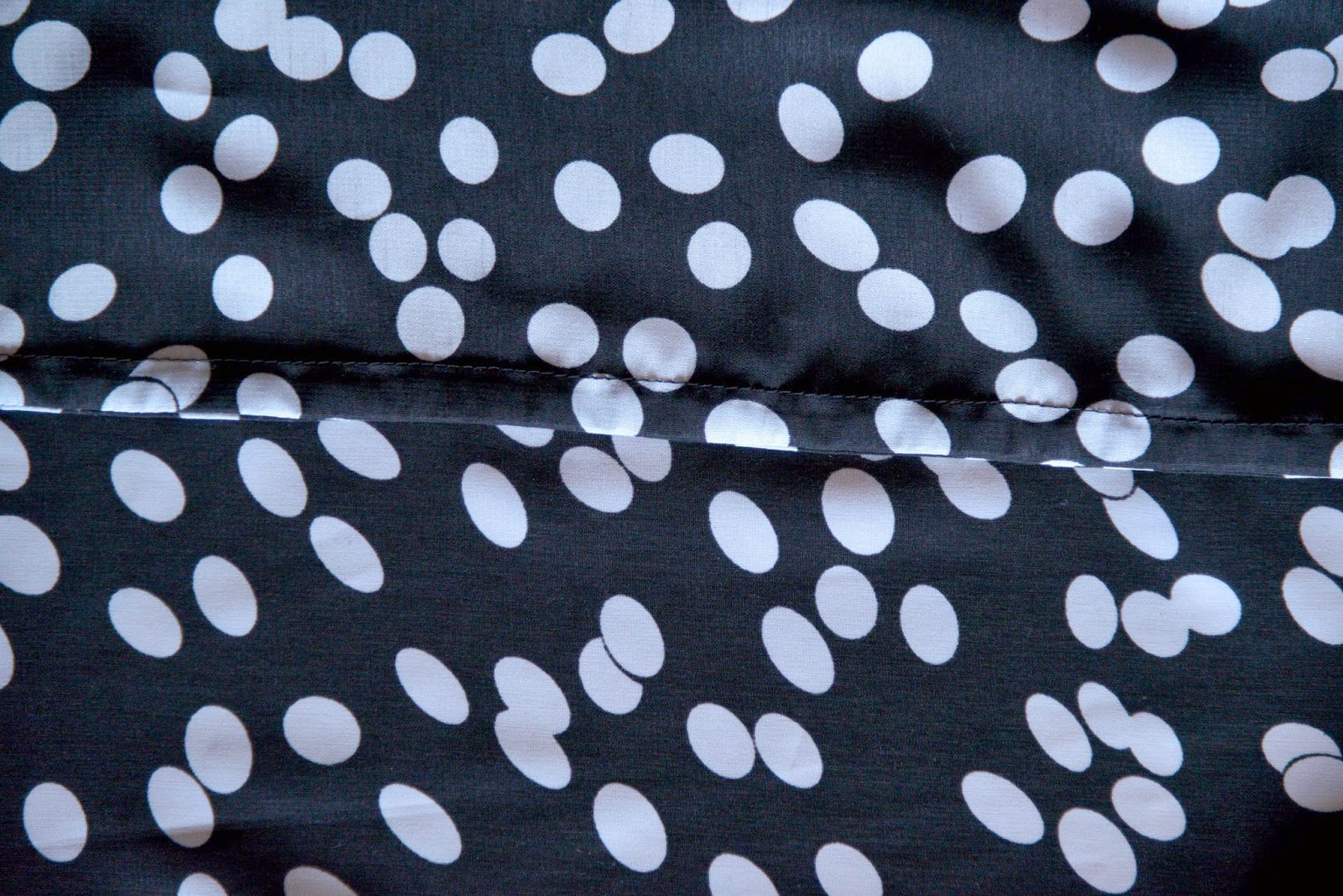 The zip is invisible, even though the pattern does not match perfectly. I tried to adjust it, but in vain, the pattern is moving in a very randomly way. It can be seen around the waist little bit, but as the skirt gets large very quickly, the fault disappears. 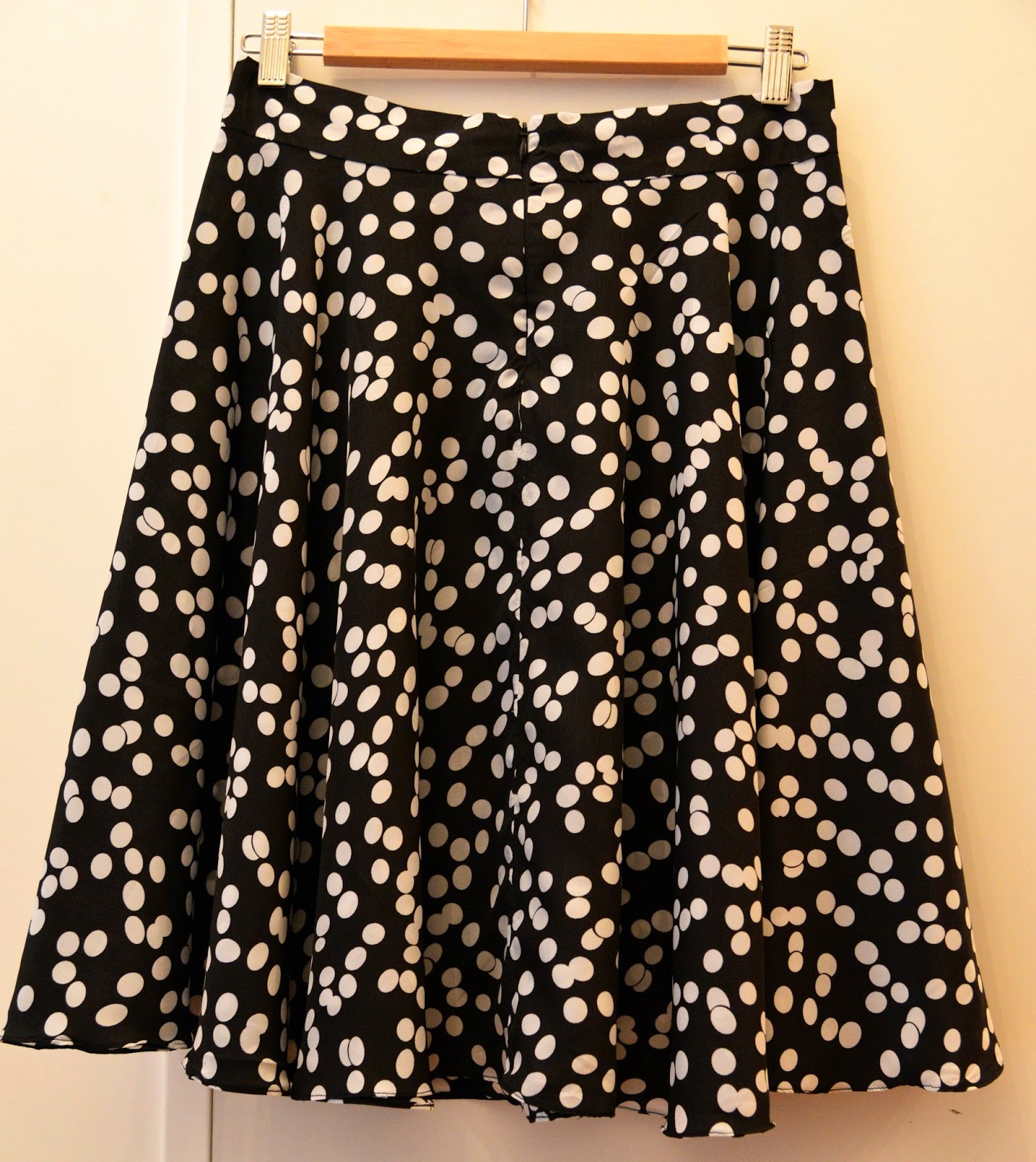 Another question mark was the hem. I have seen many large skirts with a 5-7cm hemming but that means adjusting and folding the hem, and in the end adding too much volume or stiffness. After some googling and consulting, I decided to make the baby hem. At least I tried another technique, and it turned out to be a fine and appropriate finishing of the circle skirt. 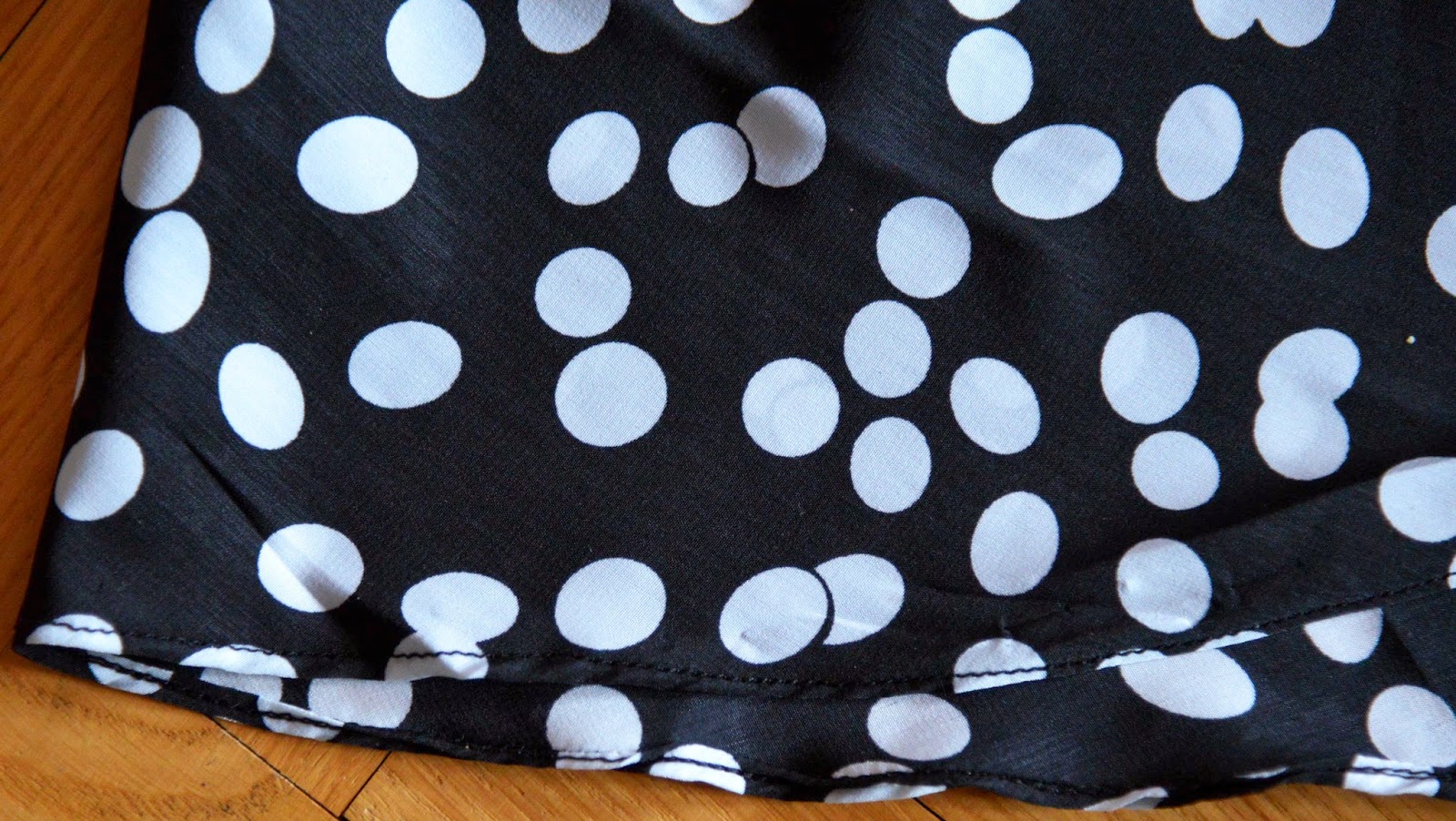 I also realized it must be more difficult to sew for a larger and taller person, handling more material and longer hems. Being petite, my fabric consumption is always lower than the one mentioned in patterns, and I rarely manipulate pieces of fabric longer than 0,5 meter, meaning that my working area consists of a part of a dining table (never used for dining, but full of other mess) and the floor. 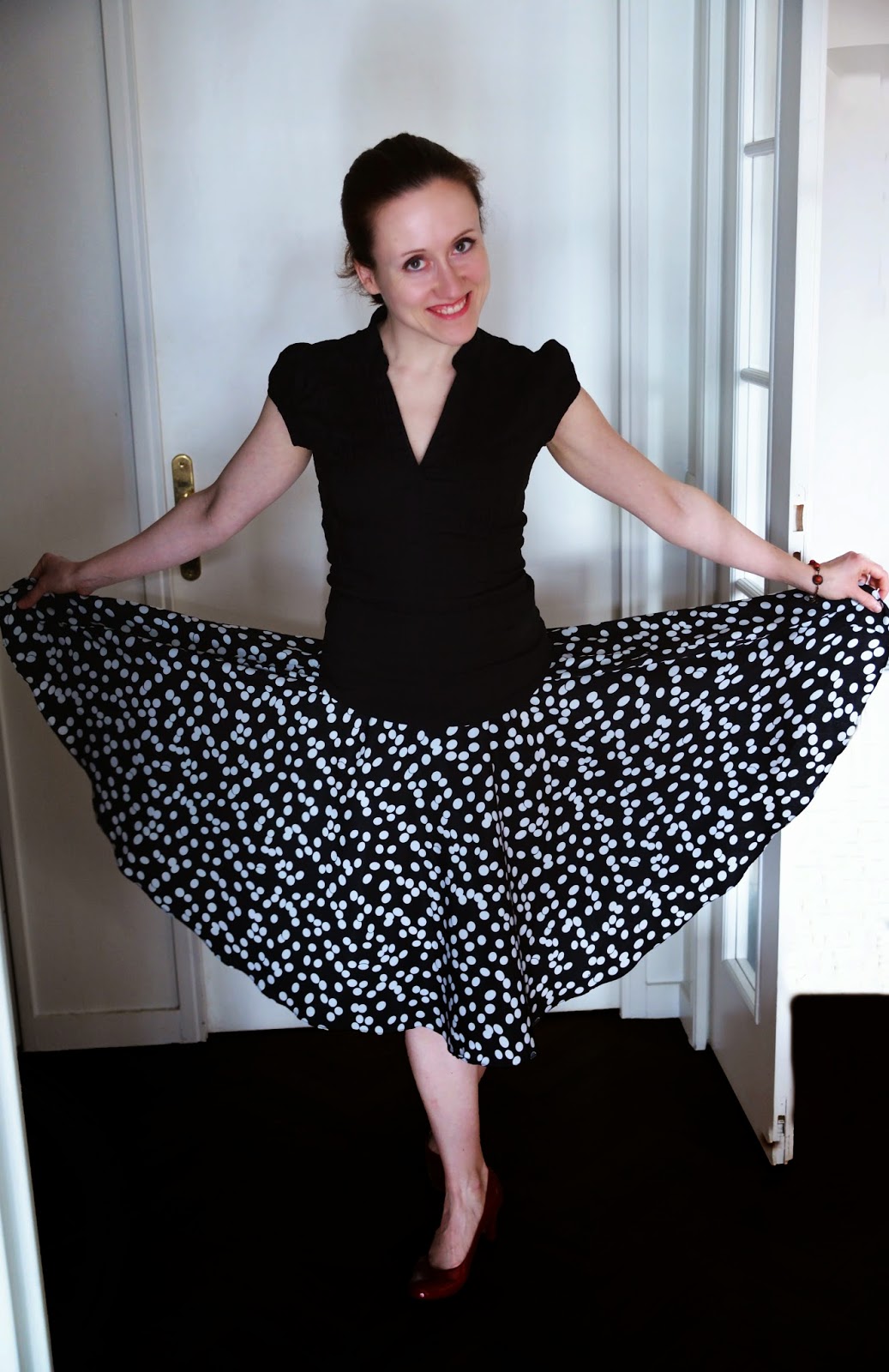 The skirt was ready in two evenings, not counting the pattern preparation and explaining my cat that rolling in the fabric (with or without needles) is a very bad idea, as is running close to my scissors. But the only interest of my cat in heat was the fabric. To pee on the fabric, to be precise, as she managed to do in the 2 seconds I did not look. So in case I had forgotten to pre-wash the fabric, I was kindly reminded to do that at this point.
Posted by B-rouchka at 14:00