I am not gone for vacation, but I started an enormous project beginning of July which only got finished this week-end.
A few month ago I decided to make a large bed patchwork cover, I spent my spring finding the right supplies and bought some missing black fabric during my last fabric shopping. I have sewed enough summer clothes to have something to wear to the office. All stars have been aligned so I could start the patchwork.

I decided to do a simple post-stamp patchwork and for the other side, as I had different pieces of black fabric, I added some colour pieces as well. The size is 216*170cm.
Cutting out this part was quick and easy. 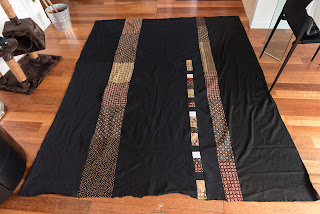 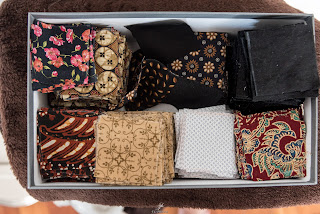 Then I spent another week assembling all of the little pieces together. 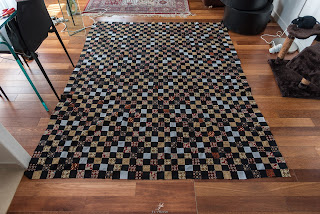 And yet another week quilting the whole thing.
Honestly, I did not imagine it would take so much time: according to my count, I spent 38 hours on this project; that is an equivalent of 3 line dresses.

The great thing of this project is the fact that it used up a lot of fabric. Like really A LOT. Over 8m, according to my excel. I not only used the whole of black cotton, but some batiks bought in Indonesia two years ago which I loved but could not possibly imagine a piece of clothing made from them.
Also, you know when you have like 30-40 cm of fabric left from a project which obviously cannot be turned into even the smallest top but you just do not have the heart to throw it away.
All this went into the patchwork, yay !!!! The downside is that as of now, I will never ever throw away a piece of cotton which could possibly go into any future patchwork :o) 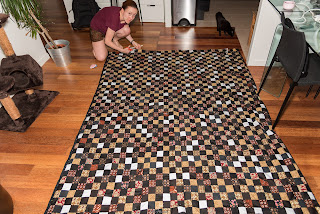 And yes, it is official, my living room is not big enough!

But back to the bed cover: once everything was assembled, I only quilted in vertical stripes to attach all three layers and then sewed the hem. I was quite overhelmed by the size of the thing because let's be honest, I only sew for myself, and all my clothes are rather small so manipulating 2m of fabric around my sewing machine was a challenge for me.

At first I only wanted to fill half of the stripes, but when I saw the result, I decided all of them need to be quilted which was a good one but meant I had to spend almost one more week-end finishing the quilting. 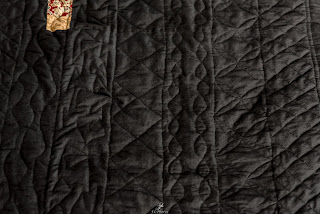 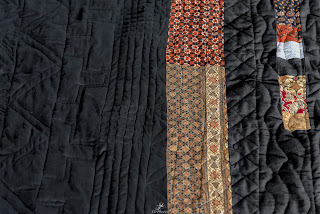 Being a total beginner, I tried to vary the patterns as much as possible, some being rather easy, or close to the border so much easier to manipulate the fabric and do the pattern, some were just long and complicated. Again: I am not used to such amounts of fabric around me and I only have a standard sewing machine, no walking foot or any other quilting perks. 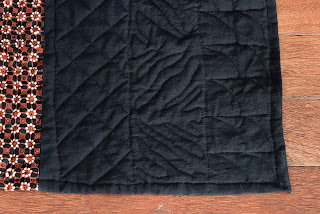 Final verdict: I am extremely happy I finished it and very satisfied with the result. The cover fills perfectly its role (now I only need to sew a cushion cover to go with it :o), I really like the colour combination and I learned a lot about quilting and patchworks.

Here you can see how my guest/piano room looks like right now. 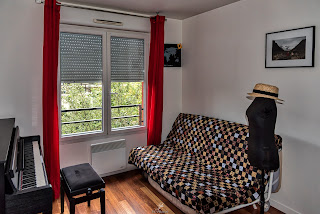 And one last - as with every thingI sew, my BF asked me to put it on so he can take photos of it :o) 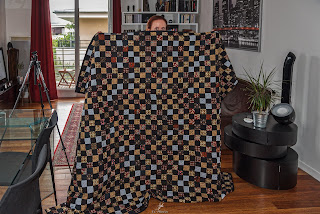