We like to leave for New Year's for warmer countries to enjoy some sun and get a dose of vitamin D o survive the rest of winter. This year, though, the New Year's destination was Bergen, Norway. Funnily enough, this city being on the Atlantic coast, it is much warmer than Oslo (which is pretty much on the same parallel) and the day we were leaving, it was even warmer than Paris.
Anytime we said to somebody that we were going to Norway, the reaction was "oooh, cool, you will have a lot of snow!". So yes, we saw a few snow flakes the last day, but in general, it was rather nice, with temperatures around 5 degrees. 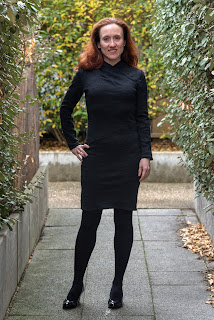 But I kept to my tradition of sewing a X-mas/New Year's dress which this year had to be warm. I used a wool thick knit and Knipmode 09-23/2018 pattern which has a covered neck and real long sleeves. 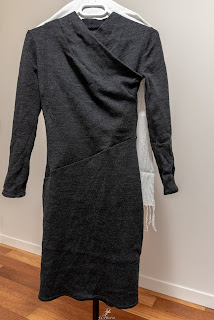 I have a blog prepared about my experience with Knipmode, which I tried twice this year and honestly, I am still not decided whether I really like them. They have some cute patterns and they have all of them in size 34 (even if they say they do not), but the pattern sheets are really a mess compared to Burda and they design for big Dutch women:o) 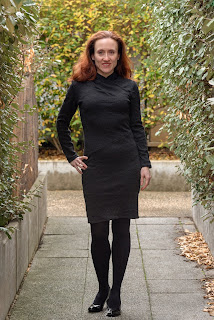 Anyhow, this dress was a success: the crossover is cute, the neckline warm and covering. I am just hesitating whether to add a lining because it tends to stick to my tights. 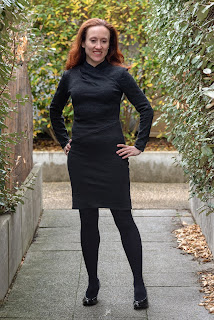 Sure, it is a dark grey without much frou-frous, so rather basic but it is very cozy, so a win for me.
Posted by B-rouchka at 07:40