Buying Burda magazines is actually quite dangerous for me. I am not a subscriber (even though my boyfriend tries to tease me with the yearly subscription every x-mas), but I play along the rule that of I like at least 3 patterns in the magazine, I buy it.
PS: I think that if I saw a super top exciting pattern, I would buy anyhow, but this rule works pretty good, as I end up buying 3-4 issues every year, plus some of their older pdf patterns (you know, when you need to sew a men’s pyjama, then the 2012 pdf comes quite handy). 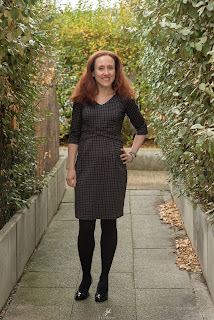 However, I am currently sewing around 3 pieces each month (I changed jobs and have now a more exciting, but also more demanding one, with longer commute which means that my weekday sewing time decreased significantly). It is an average of course, as it goes from one great coat of the year to 5 jersey easy peasy pieces. 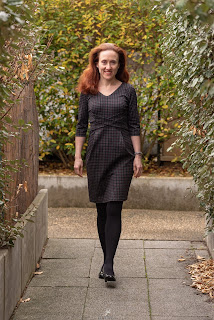 So this Burda pattern was one of those “main reasons why I bought Burda 09/2017 issue”, waiting patiently the time it would climb up the priority list. Not helping was the fact that I did not have a special fabric in stock (or in mind), so no urgency.
Last year, when I discovered sewing with ponte, I figured out that the dress does not need to be sewn with wool suiting but a nice thick ponte would be great as well. And I found the right one at Pretty Mercerie. It is a grey/bordeaux/black vichy with an almost scuba feel. It has some more poly than I am used to, but the viscose content keeps it soft and, in the end, the fabric is also rather warm (some chemical magic, probably). And anyhow, I already had the fabric piece at home, so I just decided to sew the dress, whatever might happen then. As usual, my perfectionist dark side came up to the surface and I decided that I would not let the pattern matching to the sewing fairy and I would work hard to make it happen. And you know what – I did and am so enormously proud of that. 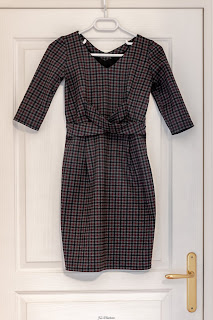 Since the ponte is stretchy enough, I did not put in the zipper (also, zip in stretchy fabric = recipe for a disaster) and I do not have any difficulties putting it on. I stabilized the crossover with thin interfacing and was pinning and basting everything. And it totally paid off. 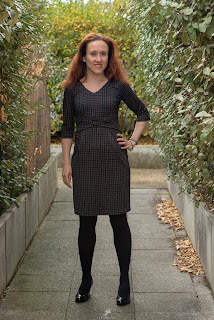 I had a few questions on the neckline finish, as all the ponte dresses I have sewn so far were finished with a t-shirt neckline, but this fabric was rather different, so I sewed in a facing and it worked miraculously. It is slightly basted on a few key points, but in the vichy, nothing can be seen.
I was little bit worried about my machine as it started skipping stitches on the double needle stitch, so I played with the tension for some time and hopefully, fixed the issue. We will see on the next make, otherwise, I will have to have it serviced soon. 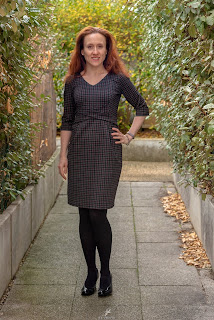