Aka Mixed-Emotions-Dress. I quite liked the pattern photos on Burdastyle, both the black version, and the colored one. Probably because it is a wrap, even a false one. 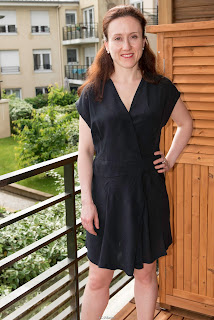 I am quite fond of wrap dresses, blouses or whatever, but so far, never mastered them properly when sewing. All my wrap tries ended up as a disaster, I must have some real issues with fitting. To be quite honest, my main fitting issues are in the shoulder area, so improper fitting results quite easily in gaping or even bigger problems. 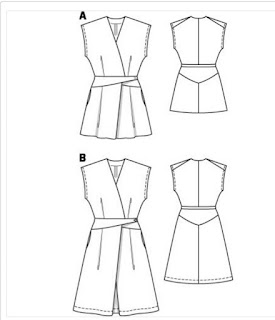 I sewed the Burda 127A, 03/2015 as a X-mas dress last year. Thanks to Burda succinct instructions, I needed quite some time to figure out the puzzle this dress is. My version is in some kind of shiny silk, which would be too strange for a daily wear. I interfaced it with silk organza which strongly helped to fixate certain parts of the dress. 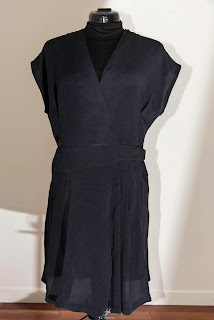 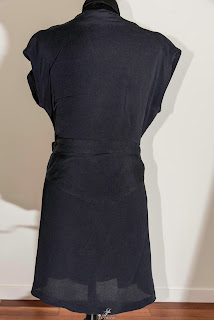 I was however surprised by the extent of alterations I had to do and the quantity of fabric I took away which did not help to the final fit.
The silk was quite difficult to iron and some lines of the dress still seem to me uneven, but when inspecting the model pictures, it has the same "problem", so I will just assume it is fine.

Also, there is quite a lot of fabric in the front and it seems to have an uneven hem. On the other hand, I really like the line of the dress, it just goes out of my standard dress silhouette! 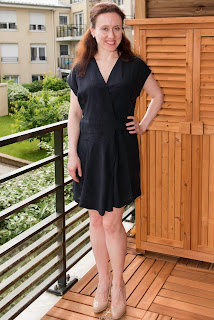 I did finish the dress only one hour before leaving for our x-mas dinner, but I have totally no idea what happened. I started early enough, but got probably taken by x-mas shopping and all that brouhaha. Anyway, the dress got worn again on New Year's Eve party and got photographed 5 month later. 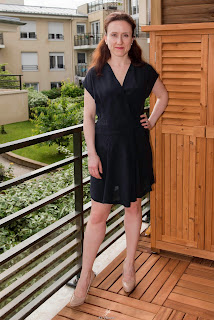 And because I like repeating my errors I already sewed this dress again, in colors.
Posted by B-rouchka at 13:42

Email ThisBlogThis!Share to TwitterShare to FacebookShare to Pinterest
Labels: Burda 127-03/2015