This dress is a mix of controversies for me. 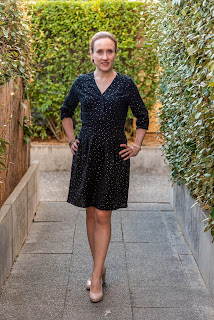 First, let's start with the fabric. I know that double gauze has become extremely popular with in-style sewists lately. I was not attracted to it so much, but found a coupon of this black double gauze with little golden dots during the summer sales at Marché St.Pierre. I think I paid maybe 4 euros for a little more than 1 meter of fabric, so I figured out I could at least try to sew something with it. 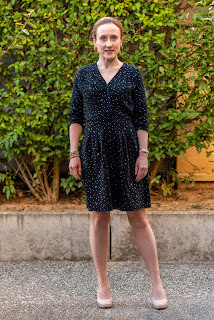 Sewing with double gauze was a first one and an interesting one, I must admit. They tell you everywhere that you should iron the fabric properly, which I could only to on the fabric reverse. The little dots melted under direct heat, so I had to be very careful with them. Apart from that, the fabric behaved properly, so I did not have any difficulties. Of course, it frays like mad, so I used French seams everywhere and did a baby hem.

Second, the pattern. When you google double gauze dress, all you can see are casual dresses, mostly large - just a style I do not wear at all. Then, I saw McCalls 7381 sewn by one of my favourite bloggers and thought that was the right one. And that's where I discovered that McCall's is now offering pdf patterns! I mean - WHAT?!?!?! Since when did the Big4 entered the 21st century. So even though the pdf pattern was more expensive than the paper one, with freight costs I usually pay from the US, I bought the pdf for the instant gratification.
The printing went ok, the pages are well numbered, so I could only print out the pages which were related to my version of the dress. However, the pages did not always fit together perfectly, or I did not understand everything.
Anyhow, I managed to trace out the pattern, muslin the top part and got to sewing. 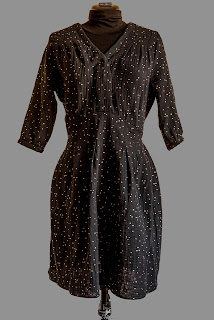 I had to pay attention on not to overfit the dress. I tend to do this, already because I like fitted dresses, but with this pattern and this fabric, I wanted to keep it casual. 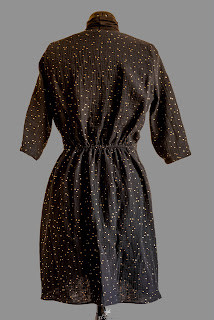 And I think it really works well together. It makes for a different dress, but I can see myself taking it to work on Fridays. 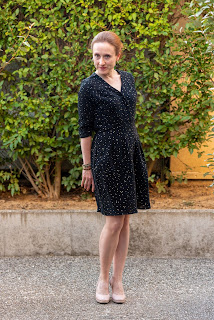 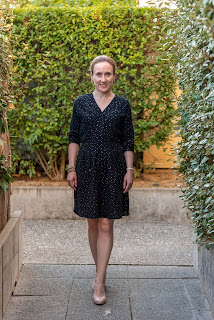