The Story of Not Enough Fabric

I cannot believe how quickly we lost summer and how suddenly the weather changed from nice and warm mornings and days to chilly in the morning and okay during the day. That being said, I actually like autumn. No risk of sunburn, no more mosquitoes and I can start layering and wearing little boots and tights. 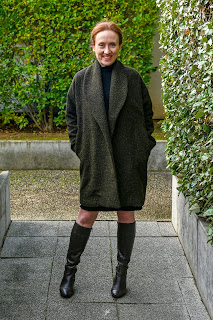 This year I feel I really started sewing autumn clothes as early as beginning of September, so when the temperatures went down, I already had a new autumn dress and have planned a new autumn coat. I know that I have sewn two mid-season coats in spring, but actually the black one really needs replacing. There are too many things bothering me, so even though I wore it almost every day, I know that I need a new one. I already have my pattern printed out and both, shell and lining fabric bought and pre-washed, but I did not start sewing yet. But... when I went to buy the lining, I found a piece of this gorgeous 80% wool which I just could not leave behind.
I tried to inspect the fabric and I would say it is some kind of jersey, but it does not stretch, like at all, so honestly, no idea what it is. I just know that it is very soft and I love the colors. 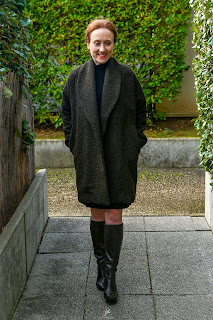 So I temporarily forgot the planned black coat and set to sewing a green cosy one. I wanted to have something different from my usual "Kate Middleton style". The big cosy coats appeared in a few Burdas I own, as well as in some other magazines. Honestly, hunting for the right pattern was much easier than anything else; and for once, I will have something right in fashion :)
I have found 5 patterns quite similar to each other and chosen the n°19/23 from last year's Fashion Style. It had the perfect lapels, side pockets and the right size.
I traced out the size 34, hoping that the oversized will compensate for that, eliminated the pleats on the sleeves (honestly, I do not need that additional volume), sewed a muslin, taken away another 3cm on each side and adjusted for my height, as usual. 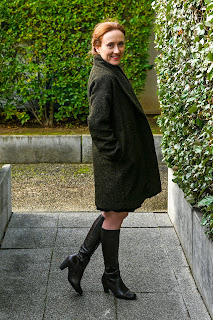 I was totally right to do that because I realized that I did not have enough fabric. Or almost. Or did I ? Well, I only bought a coupon of 1,5m (actually, they had a coupon of 3m, which I asked to cut and they do not do cuts bigger than the half). And honestly, there was some serious pattern tetrising. I had to cut one of the facings in 2 pieces, which you can barely see, because the seam just blends in the busy fabric. The side pockets are also cut from a piece of black cotton-silk. Once I was so happy with myself that everything got cut out, I realized that I did not account for the waistband. At that point of time I only had a few scraps, so I got to some serious piecing. Again, the fabric hides a lot of seams, so I managed to obtain a waistband of 1,3m which is enough for me. And I think that the only remnant I have now is a piece of fabric of a few square centimeters. 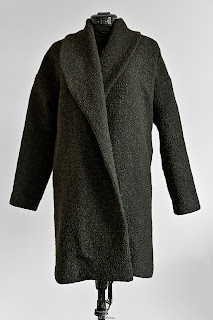 I interfaced the fabric with a quite light fusible vliselin which helped a lot to keep the body of the fabric. I must say that it frayed like crazy, so I zigzagged all the internal stitches, even though I usually do not do that.

And then, the same story happened with the lining. I used barely a 1m remnant of black silk lining, no piecing required here, but only a few little scraps remaining. 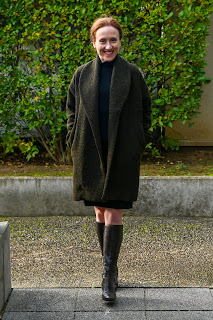 Once the cutting adventure was behind me, the sewing was pretty straightforward.
No special closing, I just sewed a little press button to keep the waistband attached to the coat, so as not to lose it, but in the end, I prefer it without the waistband.
Posted by B-rouchka at 11:22