I must have felt that the second covid wave was coming (well, seeing people behaviour in August and September helped a lot), because I passed a quite large fabric order just at the end of September to have it at home in October. Actually, browsing Stof&Stil website proves rather dangerous, because I totally love their online catalogue and get inspired, probably too much inspired.

So while this order threw me quite far away from my stash reduction goal, I am not desperate (yet), I still have some two more weeks in 2020 to go and it looks like I will be spending them at home a lot, so let's stay positive, I have all my chances to get close to the goal level. 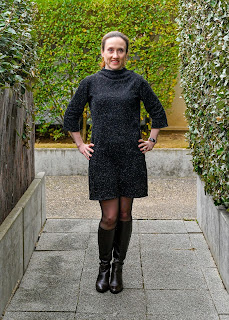 One of the fabrics I bought (and somehow forgot between the moment I paid my order and it being delivered) was this exquisite black French terry with little white flecks. Not only is the fabric nice and quite classy (for a French Terry, that is, hahahaha), but it is also extremely soft on the inside.

The choice of the right pattern was rather quick, as I was eyeing the Burda 111-01/2019 since I had the magazine. It is a simple jersey dress with a high neckline and very simple lines.

Since I can now master my serger and since I already had black thread in it, this pieces just flew through it and was sewn in no time. I realized that batch sewing is really the way to go with a serger because you feel more productive. 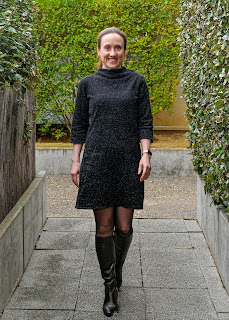 Back to the pattern - I actually did a few modifications - the dress is supposed to be closed with a zip on the back which I omitted, but kept the back seam. The dress itself has absolutely no shaping opportunity in the back, apart from the back seam, so I played with it a little bit. Since my fabric was not extremely stretchy, I was afraid that I could not get my big head through the funnel neck, so I improvised a little opening in the should seam with 3 press buttons. 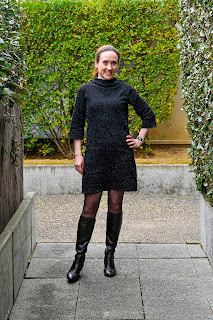 In terms of shaping, I took in a few centimeters on the front as well so that the dress is adjusted without being it too tight. 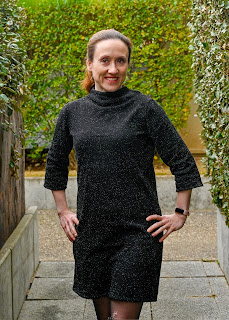 And the result is just awesome. I am not yet sure if I would wear it to work, even though it looks ok in the black and white, but somehow, unconsciously, I still have the feel of the French terry on the inside and so think of the dress as a casual one.