Where is the World Going?

America voted for Trump, Britain to leave the EU, the French had an extreme right candidate in the presidential run off and I made a jumpsuit! And I am really considering wearing it.
Ok, I know these are not very comparable, but the French presidential elections were rather stressful for myself, being an EU citizen living in France, an election of Marine would have serious impact on me staying or not staying in France in the future.

So while watching the "Grand débat"- big discussion between the 2 candidates which was extremely hard to follow, I needed a project to occupy my hands. And while my sewing queue is full of little dresses in order to prepare summer (in case we have some this year), I decided to sew up a jumpsuit. Yes, you hear me well, I sewed a jumpsuit. 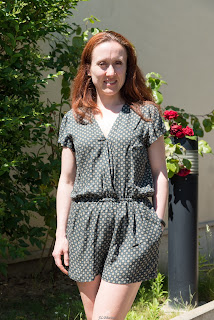 Just to explain little bit: for me jumpsuit is like wearing pyjamas outside and even though I have seen cute and very elegant ones (on real people, not in the fashion magazine), I was rather skeptical. Also: how much time do you need to spent at the toilet taking it off and on again?

Anyhow, I bought the May Burda (looking into my archives I buy May Burda every year, there must be something about it then) which featured 2 jumpsuits again, one for standard and one for plus sizes. Started thinking, looked into the previous Burda magazines which ALSO feature jumpsuits (is it like: February - carnaval, September - dirndls, May - jumpsuits - go figure...) and found my favourite. 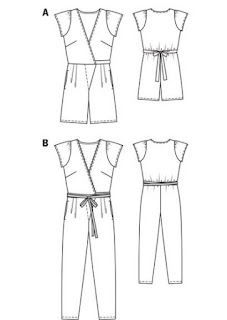 So mine is a model 129 from May 2013, with a simplified bottom from this year May Burda. I was rather surprised by how little adjustments were needed. Basically I only shortened the length of trousers and closed the cleavage by 2cm on each side.
I found this blue/turquoise viscose in my stash. It was originally bought for some homewear/pyjamas. I tried to sew a shirt from it two years ago which was a pretty bad idea: the fabric is slippery and stretches very easily. For the jumpsuit I interfaced the front diagonals, as well as pocket openings, I also staystitched the sleeve curves and it worked magic. 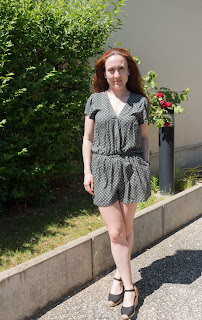 I did not put any pressure on myself, this was supposed to be more of a wearable muslin, if it turned well. And actually I kind of like it. It looked fine already without sleeves, but eventually, I decided to set them as well, any protection of my shoulders against the sun is always welcomed.

The end result is pretty good: it is comfortable, the viscose is very light and feels nice against the skin, it has pockets and the colours suit me well. I put a little snap to keep the cleavage closed, just in case. 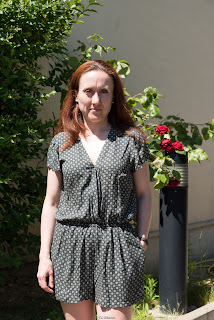 The worst thing: I am actually thinking of sewing another one, as I have another piece of viscose in my stash I do not know what to do with it :o)