This dress was definitely an example of totally unprepared sewing. 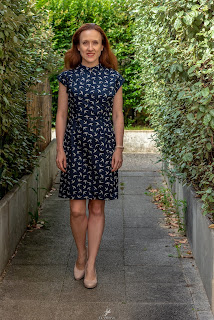 First the fabric. I bought this fabric beginning of this year over internet (Sew over it), as I liked the swallows, however, the weight was not at all what I expected. The fabric was much stiffer that I had thought, so my original plans were cancelled. Also, I think it was the first time I ordered something and had no follow-up afterwards - no delivery progress, no follow-up on the order. Quite a disappointment, I ended up e-mailing them only to know that my fabric has been sent and it actually arrived the other day. But for somebody used to amazon, that was strange. 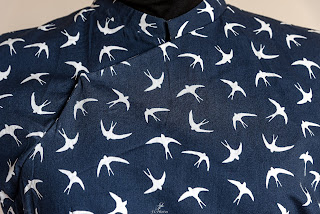 The pattern. I had bought this Simplicity 8244 at least 2 years ago and forgot about it. It is a vintage dress which can be easily modernised, I like the mandarin collar and the close-out, it is just very different from all the other styles. 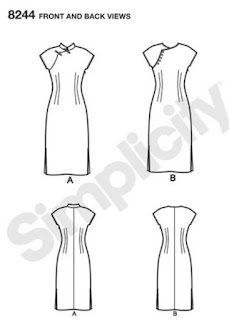 So when looking for a simple shift dress to play with the swallows, I thought this one could be a nice match. And it was. There are 4 darts in the front and in the back and then the front cut-out, and in terms of cutting the fabric, that's it, yet, the dress is different from any other I have sewn so far. I was little bit puzzled with the way the facings are sewn, but this is Simplicity with all the pictures and diagrams, so no worries. 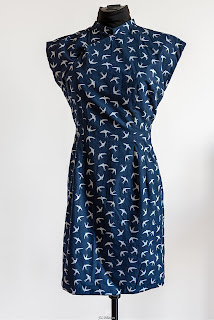 The lining. I was not sure if I wanted a lining (the pattern does not call for one), but the fabric is somehow too stiff and not so nice against the skin. In the end, I dag out this white viscose voile from my stash and played with the pattern to add the lining pieces. 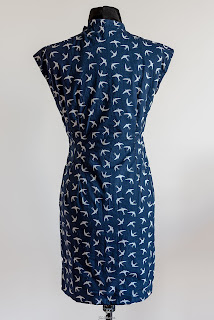 The notions. I ran out of blue thread in the middle of the sewing. And I did not have blue zipper either. The dress waited 2 weeks for me to go notions shopping. I finished two other dresses in the meantime. 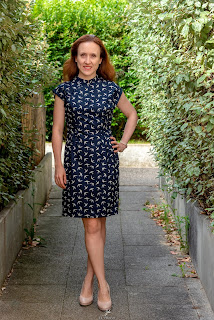 The notions n°2. Originally, I wanted to highlight the opening with some Chinese closings. I bought them in white, but in the end, did not like them on the dress. It was just too much between the swallows and the closings. So the dress is just finished with some press buttons. 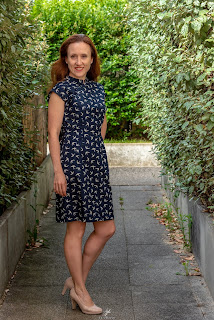 The final verdict: simple and yet, cute. I will wear it to work, despite the swallows (I try to avoid too cute or infantil fabrics, but this one will work). 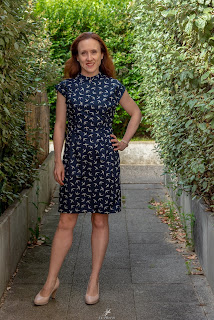