It is funny how the choice of patterns to sew can be influenced. I have already pondered about how I can check Burda magazine, not like anything in it and a few months later "discover" an amazing pattern in it. 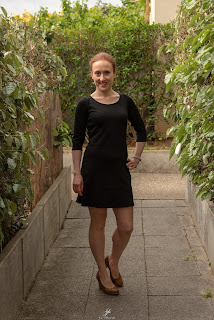 I might have a "to sew" wishlist which I am going through slowly, but in the end, when an interesting pattern comes by, I will change my priorities.

And this is how I sewed from La Maison Victor for the first time. Truth to be said, this is not a magazine I prefer. It is nice, on great paper, with detailed explanations, cute styling, but when I look at the technical drawings, there is rarely something to fall in love with. I find their patterns rather simple, nicely styled, but I already have a stock of simple patterns to begin with, so I have never bought the magazine. 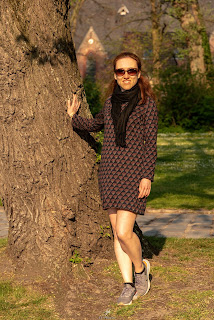 Also, it takes way too much space for the few patterns it has. Again, I do not think I really need the detailed explanations on simple patterns.

However, at the beginning of the year, I read a blog on 3 patterns sewed from the winter issue of LMV and I actually liked all of them. At that point of time, the magazine was no longer on the newsstands, OF COURSE, but I managed to order its German version and start sewing from it.
For the moment, I have sewed only one pattern - the Cara dress - but I did it twice and it is certainly not the last one. 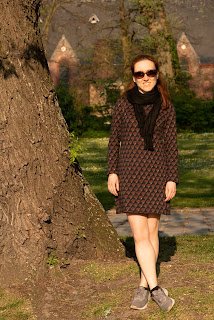 The first is from a quite thick viscose jacquard from Stoff & Stil. I really liked the colours and it makes for a nice transition spring dress. I am not sure about the long sleeves though, as it looks too much like a pyjama, to my liking. We'll see if I decide to shorten them.

The other dress is from a milano black jersey and honestly, I have no idea how I messed up on that one, but on the black version there was just way too much fabric around the arms. I ended up shortening the dress on the shoulders (my usual adjustment) and taking away some of the fabric excess. Dress saved, but in the end, I must have lost a few cm on the length, to the dress is slightly too short now (at least when worn without thighs). 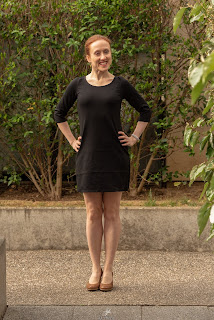 I am starting to think I would add a panel to extend the length and sew this dress in black again because it really creates a great little black dress for everyday wear, it is a perfect secret pyjama. 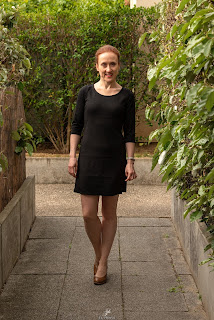