I have been pondering sewing a long jumpsuit for some time now. Actually there are two reasons: jumpsuits keep popping up all over the blogosphere and I had a colleague who was a big fan of jumpsuits and it was always so nice and elegant on her. 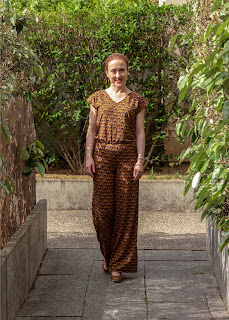 I had sewn 2 short jumpsuits about two years ago and wore one of them on vacations. The other one is clearly showing too much skin to my liking, so I ended up donating it (it was originally a long jumpsuit with open back which I shortened, so it ended up not quite harmonized).
However, I wanted to try my teeth on a long one and the Sallie jumpsuit from Closet case patterns seemed quite appropriate.
Now, I have to admit that there were like 3 months between the time I bought the pattern and the fabric and another 2 months before I got to sewing it. And that is where I realized that Sallie is clearly defined for 4way stretch jersey fabrics and I had bought a black viscose crepe (with 0 stretch!). I sewed a muslin in the size above, just in case, which revealed that whatever happens, it was not going to happen in a woven fabric.
For whatever reason, I thought having seen the Salie jumpsuit in wovens, but a quick google search only showed jersey versions, so I capitulated.

Change in plans:
1. I ordered McCall's 7366, clearly a woven jumpsuit I have been eyeing for some time now, as McCall patterns were on sale

2. I decided to use this viscose jersey I had bought at Stof &Stil at the beginning of the year and was not at all convinced on. I actually did not like the pattern of the fabric (also, it feels rather viscose-y), but when trying it on, I thought it was rather cute and in my colours. I must admit that when ordering it I was not expecting it to bee soooo stretchy, and in the end did not know what to sew with it. So the jumpsuit was actually a great replacement project for it. At worst it would only be a wearable muslin. 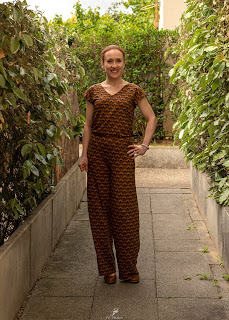 As expected, the fabrics was really painful to sew. My machine was chewing it on occasions and the fabric is strangely light-weight and heavy at the same time. I put a clear elastic on the shoulder seams, as well as on the cleavage, just in case. I can feel that the fabric can stretch very easily, especially with the weight. Also, I adjusted the waist elastic really on my waist, because this is the only thing holding the trousers part in place.

As for the pattern, I added 2,5 cm on the cleavage and I really like it that way. Also, I lengthened the the bodice part by 2cm, next time, I will shorten the crotch. I do not know if it is because of the trousers' weight, but I feel it is slightly too long. On the other hand it really creates an illusion of incredibly long legs ;o) 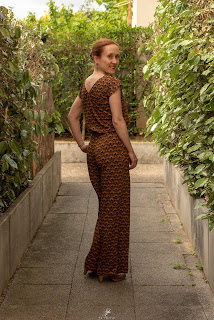 Verdict: I totally love the style! It is rather easy to take it off, so technical break does not equal 10 minutes of getting un- and dressed.
I think that it is too colorful and too pyjama-feel for wearing to work, but as a casual outfit, I take it! 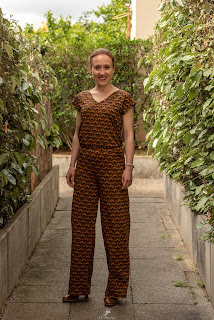