This is the last batch of kid's sewing I did just before x-mas.

Of course, sewing for little girls is just fun, I can play with colours, buttons and all the frills I would not put on my own clothes. It is also challenging, because my rule on kids' sewing is not to buy any new fabric and only use scraps or fabrics I bought and do not like any more for myself. (actually, one of the reasons I sew for kids is to use up the scraps and balance my stash in general). And therefore, I need to find a way how to use my "adult" fabric to make cute clothes for kids.

Also, it all goes so quickly and is so nice, so why not do some more.

This year was definitely a year of sweats and hoodies and the little girl could not be an exception. In the one and only Ottobre Kids I own, they actually had the same sweater pattern in both, boy and girl version. The girl version does not have pockets, but has a large ruffle on the bottom and little ruffles on the shoulders. When sorting my scraps, I found I had a remnant of a French terry and a cotton jersey which were ALMOST the same colour, so I used the French terry as a base and the cotton jersey for the frills and the hoodie hem. Apart from the fact that I had enough fabric to cut out the sweater and used up more scraps, I think it was really a good choice because the ruffles are less voluminous. 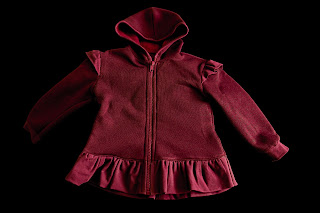 And to go with the sweater, I made a little dress. 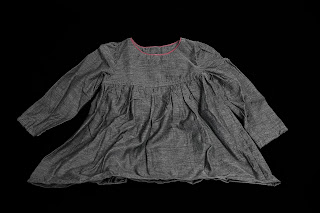 The pattern is a combination of two Burda dresses. It is made from a fine cotton-silk which I tried to reinforce on the bodice part. I used the bordeaux jersey for the neckline and found buttons which were of an almost the same colour. I really like when things work out so well. 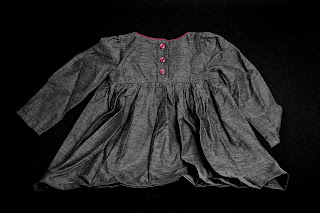