So it seems that on the little dress I sewed for x-mas, the waist opening was not large enough. The little lady could wriggle in, but try to convince a 2-year old to wriggle in a dress, hehehe. It was fine and large enough when closed, so I took it and redid the opening so that it is easier for the parents to dress her. On the other side, the little sweater had quite some success. Both parents said that it was rather practical and much easier to close a zip than a serie of buttons.

So while I was somehow between projects between December and January, I did not want to go forwards with my jacket and did not want to start a big new project while waiting for my serger to arrive. So I procrastinated on some kids sewing. 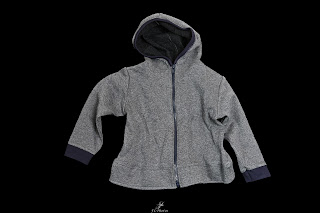 First, I sewed another sweater, this time in grey interlock. I actually had the same fabric in two colours, anthracite and olive green, but on the reverse side, they both were just the same shade of light green. Perfect for using up both of them. This time, I omitted the frills because the interlock was too thick for that and I hemmed the hood and the sleeves with some blue jersey. Hopefully, this sweater will work as much as the bordeaux one. 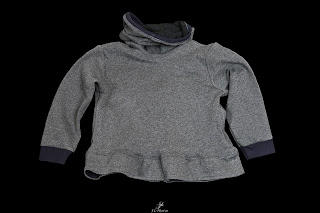 In addition to that there is a little jersey dress. I actually bought a little piece of this yellow raie fabric for sewing of a pair of trunks for Monsieur. But when the fabric arrived, it was way too much yellow that I thought and therefore, I decided to change plans and sew a dress for the little lady (who is a blondie, btw). 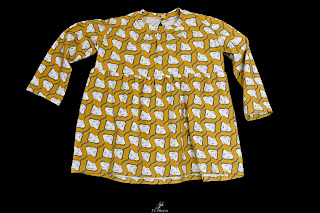 I wanted a simple dress, but could not find a suitable pattern (incredible knowing how many Burda/LMV patterns I own, but it was either not the right fit or not the right size.
In the end, I mixed LMV Daisy dress and a t-shirt from Ottobre.
I really like the keyhole opening in the back and that little rushing in the front. Also, it is strange how in the kids sizes you just jump from 2 years to 3 years immediately. So there is definitely a significant difference between the two, but it really seems like there is nothing in between. (which btw seems to be the same case in RTW).
Since the little lady just turned 2, I somehow traced out a 2,5 years size :) Oh, the joy of sewing and deciding. 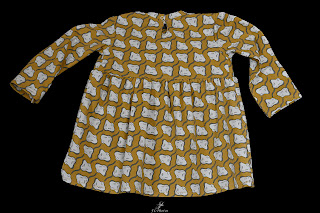