Contrary to what many people around me say, for me 2016 was a great year. We bought a house, we moved in, we spent great holidays in summer, and yes, I might have had my last marathon cancelled on a last minute, or it was kind of stressful work-wise, but all-in-all it was a great year.
Also, sewing-wise, I was the most productive so far. I did sew some 38 pieces, which was helped by the fact I made a bunch of easy separates, but these are things I also wear, so it counts.

Stash-wise, I actually decreased my stock level! I sewed up 53m of fabric and only bought 35m, which puts me at 18m down this year, YAY 👍👍👍! More importantly, I did not feel deprived, I was still buying some fabric, some of it was actually lining so that I can sew up the fabric from my stash which is a good thing.
It still brings me to some 125m of stash at the end of the year, while my aim would be somewhere around 100, but the end-result is grand. If I continue like this, it might be quite realistic soon. As a reminder, 2015 actually added 33m to the stash.
Here is the result by month: 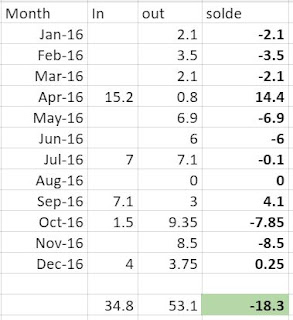 I was really happy to use some fabrics which I liked but had no idea what to do with them:
Like this bunch of orange silks 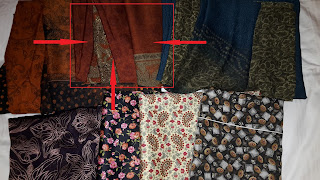 But also that black rosey cotton-silk below which I just considered too pink..

Also, this black-blue false lace was a piece I acquired early in my sewing career and it was just waiting to be donated. 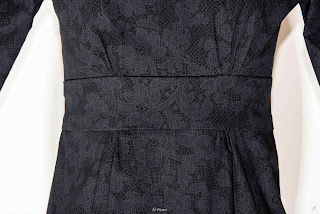 I learned to use stash and small remnants thoughtfully, so a few of this year's makes were tops made from the remnants of fabric already used for something else.
I am no longer afraid of using other linings than black, since my sewing skills improved, nobody can see it, but it is kind of fun and uses up too some crazy silks from my stash too.
Case in point: 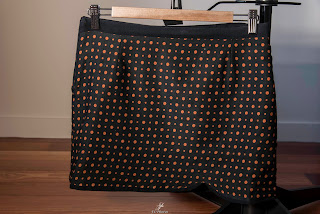 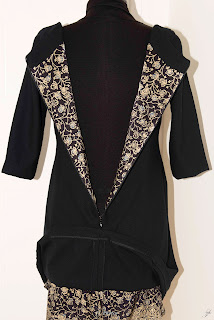 While I restrained myself on fabric shopping, I continued to buy Vogue patterns and Burda. The individual patterns still need to be sewn.. ahem, ahem.... but this year's Burda was full of good surprises.

My yearly statistics:
23 pieces based on Burda (mostly magazine, but a few individual patterns bought as well)
2 pieces Newlook - actually 2 dresses from the same pattern
4 Simplicity - mostly repeats
2 Vogue
7 others - includes a top based on Anna by Hand London sewn 3 times and 2 GBSB dresses (one for myself, one for my sister)

So I can honestly say that occasionally buying Burda makes totally sense, but I should definitely stop with the others, as I am less motivated to sew them up.

This year I also learned that often the less I plan, the better the result. Many of this year makes were quick decisions, sometimes even on a coup-de-tête and honestly, these projects scored high. On the other side, those I wished for for a long time or planned for were rather flops. I am naturally a planner so this revelation is kind of a surprise but I like the fact that it is working :o)

Another thing which worked well and which helped my productivity: I stopped thinking I needed half a day off to have enough time for sewing. I am now sewing in smaller time slots (even 30-60 minutes counts) in the evening which is still sufficient to do something. Mostly for sewing muslins, cutting the fabric, while the real sewing is then done during the weekends.

Last, but not least, I need to keep up with blogging: I just realized one of my quite successful summer dresses never got posted (while I have all the pictures done), not talking about my November/ December productive period. So hopefully this is to be improved in 2017.
Posted by B-rouchka at 04:30