I must admit, I just love Kay Unger's offer on Vogue patterns. I do not know this designer outside of Vogue world, but anytime I am looking for a nice somehow interesting fitted dress, I always end up choosing one of her models. In the past I bought a few of them but they are still waiting for the "right occasion".... hmmm... It is also true that sometimes I am little bit intimidated by them - which was typically the case by this pattern - V1432 - I totally loved the look, I wanted to sew it as a summer dress in linen, but I thought it would take too much time, concentration etc so that many other projects got ahead of it. 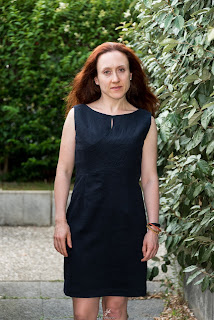 However, in my summer-dress-sewing-phase this year, I dag the pattern again (knowing I already had the fabric and everything) and I went for it. My sewing tactics of preparing the muslin and cutting out everything during the week evenings and really sewing during the week-end worked magic again. I started sewing early on Saturday and by Sunday evening the dress was finished - in the end it felt even too quick. 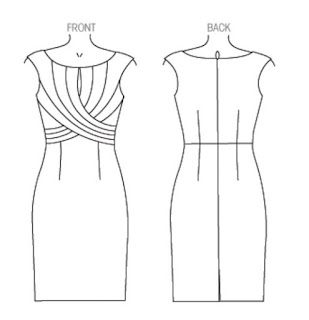 Of course, I did sew a muslin - the pattern is just too complicated in the bust area where I usually make most of my adjustments, and I was right. I think that I had to take 5-6 cm from the shoulders, however, almost no modification on the bottom of the dress. 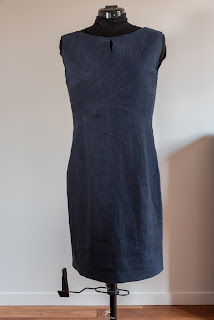 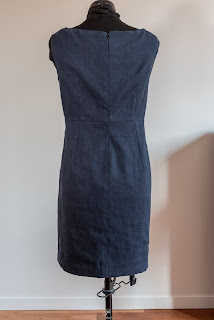 I used this beautiful dark-blue linen which was really great, it pressed amazingly well and obeyed perfectly. Of course, the upper part of the dress is completely interfaced (very light interfacing, but totally necessary, knowing that linen stretched too easily and all the pieces were cut either on bias or on curves).
Also, I took time to stay-stitch all the seams, which took ages but I thing it was definitely worth it. 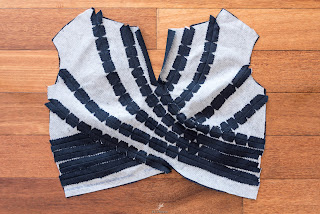 And once the upper part was ready, the rest of the dress was a piece of cake and went together pretty quickly. 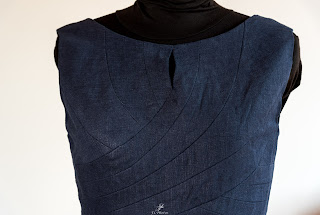 The morality of the story: do not get intimidated by what seems like long projects, the result is totally worth it and I loooove this dress. It is just the perfect summer work dress: simple, unicolour, but somehow very interesting. 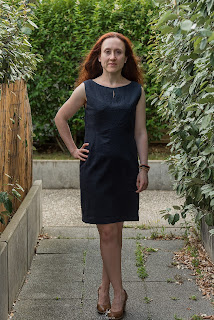 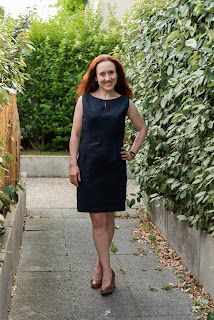 Orange is the New Black

I am very proud of myself as for once I am sewing the things from my wishlist. I think this dress was on that list for like two years, maybe even more, as I own the Burda with this model since I started sewing 3 years ago. 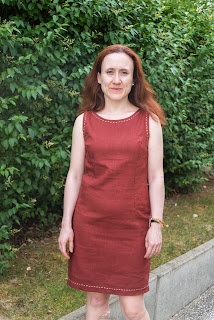 It is a simple shift dress with interesting inserts (therefore a simple one-colour fabric) and little decoration just for the fun. I really love how these cute details completely change the dress, while keeping it simple still. The model is n° 117 from June 2013. People might not like Burda, but honestly, there are real jewels in this magazine. 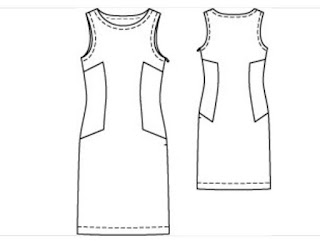 All the fitting is done thanks to the inserts, so the fitting changes can be a challenge. Fortunately, my Burda adaptations are always more focused on the shoulder area, and on the general lengths of the dress, which was totally doable. 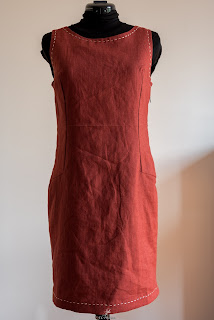 I used some dark orange linen bought last year during sales period. I only had about a meter but that was all what was needed. I was hesitating about the lining. Black would be the obvious option, but then I discovered this flowery silk lining in my stash which fits perfectly with the orange and that was it. There was no way I would add black lining once I saw the colour combination. And it is my little secret in this dress. 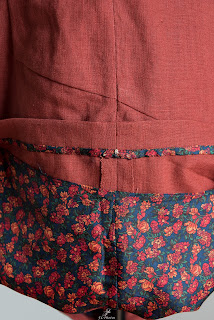 Sewing with linen, I was very careful when ironing and stabilized properly all curves, I have now learned my lessons :o) Also many seams were catch-stitched, just in case.

As for the decorative top-stitching, I had originally bought dark brown embroidery floss, but in the end, I went back to pick up something clearer. And I do not regret. 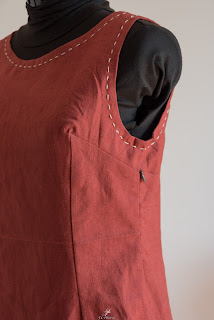 To be honest, the end result is much better than what I have expected, the fit is OK, the colour nice and the little top-stitching is just what had to be added. 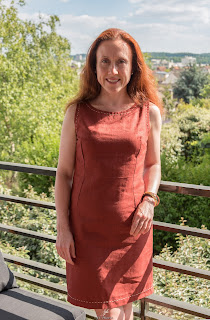 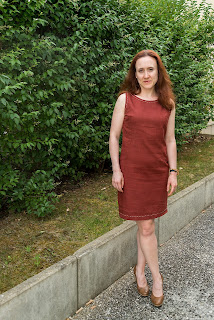 Upps, I did it again.... Actually, I really liked my first jumpsuit and jumped immediately in another jumpsuit project. 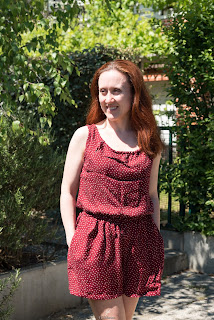 I do not have much viscose in my stock, as I do not sew from it much (and there is a good reason for that). However, I bought this full red viscose back with little whte triangles in 2014, I think it comes from the first batch of fabrics, I actually took it because it cost only 3eur/3m telling myself that it would work for muslins. What a crazy idea, but I was young and inexperienced then... Of course, the fabric got never used for muslins and slept in my stock, so I decided to use it for this rather funny project.
I am not used to sewing with viscose and honestly, after these 2 project, will definitely not do it again, so I am very careful not to buy it anymore. Both viscoses are very soft on touch and extremely comfortable on the skin, no issues with that. But sewing them is a nightmare, the fabric was moving in all the directions, it did not want to go under the machine and I had to be very careful not to stretch it. Stabilizing became my favorite verb - I put vliseline everywhere - around pockets and around all the openings. It paid! All the time I was screaming: "please give me some silk mousseline to work with!!!!". Really, what is the point of putting the effort and ending up with a viscose piece of clothing when you can put in the same amount of pain and effort and end up with a splendid silk garment. Just a question... 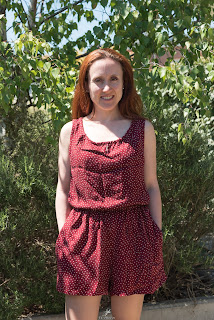 Coming back to my jumpsuit.
The pattern is 124 from Burda 04/2016, I omitted the waistband and the back zipper and put in an elastic in the middle. I changed the back opening to 2 hooks and eyes instead of the laces - with long hairs it is much less fussy. And of course, I sewed a short version, an pockets - yes I have pockets. 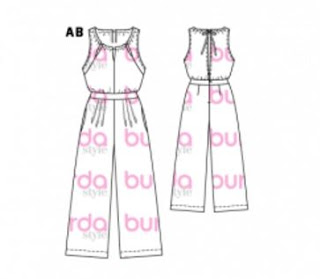 Sorry for the overexposed pictures, but it was too nice not to go out for the pics.
As for my previous jumpsuit, this one is also a success and will make a cute piece for holiday season. 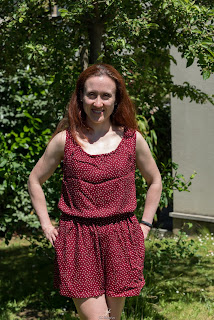 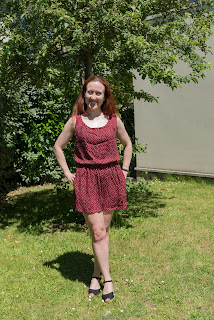 And promised, this is the last jumpsuit of this season, I am starting my dress serie now.
Posted by B-rouchka at 05:04 2 comments: