You know the moment when you have a perfect sewing plan, you choose the next three projects to be sewn, trace them out (yes, all Burda), sew two muslins, start sewing one of the projects and then, read some blogs on your commute and suddenly, you just have to sew a little black skirt. 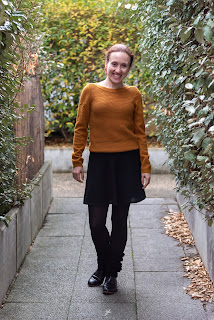 Actually, I saw this blog post and liked the silhouette, even though the post was more about the sweater and not the skirt. The skirt is a Zephyr from Deer&Doe, but honestly, does not look so complicated so as to justify buying the pattern. I figured out that a semi-circle one would work fine for me.
Also, I just had a remnant of half a meter of black wool crepe which is drapey enough for this skirt to work (yay for using up the little remnants). I cut out a semi-circle with about 40cm of length, well, the maximum I managed from my little piece of fabric and hoped it would be enough. Since the crepe is somehow not 100% opaque, and tends to stick to my tights, I lined the skirt as well and it actually changes everything. 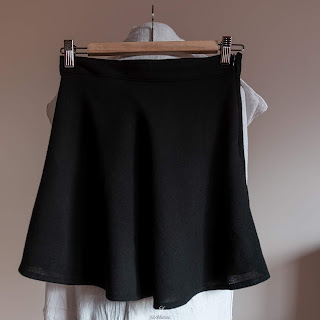 I do not think there is anything special to mention about the skirt, it is really a simple semi-circle one with a straight waistband. I interfaced the waistband with some iron-on interfacing and a piece of very stiff cotton because the crepe would be moving too much and not hold the shape at all. There is an invisible zipper on the side and that's it. 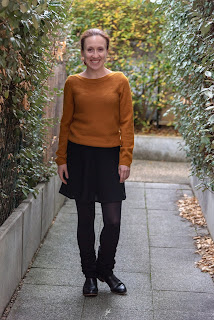 I finished the skirt rather quickly, left it hanging for almost a week and I was right; both the crepe and the lining moved a lot, so I then leveled out the hem and used some lining bias to finish the hem (it is little bit stiffer as well). 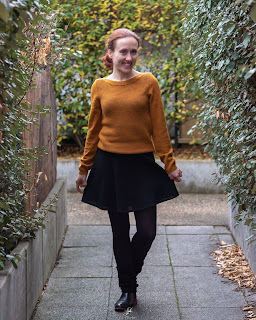 I know this is no sewing challenge, but I now have a cute little skirt for the week-end days when I just want a different silhouette from my usual shiftdress/pencil skirt. 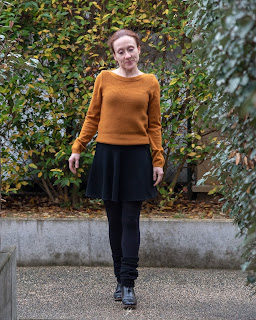 I am all about resolutions every year, I kind of like the challenge, but I am still not fan of the internet challenges. It somehow does not work for me.
Let's be clear, I always have a to-sew list, even sorted by seasons, but that does not mean I would sew these items as a priority. I totally love seeing bloggers fulfilling their SewNine challenge, but cannot imagine setting it for myself. I like planning no more than 1-2 projects in advance and quite often, the inspiration comes from things I see in the real life, or on the internet and then I just throw my plans in the air and sew what I liked.

"Planning is everything, the plan is nothing" is probably a good description of my sewing plans.
So I will not set myself any specific challenge, as I will not participate in Me-Made-May (I already wear me-mades almost every day) even though I like the idea of participating, however, I have a few 2019 resolutions:

Decrease my stash to 90m - which means a 10% decrease (99,8m was my startig point) which is totally doable if I use the same strategy as last year, aka do not buy fabric without a plan and restrain myself during sales period.

Sew another coat and another jacket. The dress code in my new job is slightly higher and I have a fabric bought specifically for a nice jacket.
As for the coat, I have fallen in love with this "different trench" - great example of my Burda special relationship. I have the number where the pattern appeared but only when I saw these exquisite version, I realized that I could sew it in a short version and it would be THE not-so-harsh-trench I have been looking for for years. 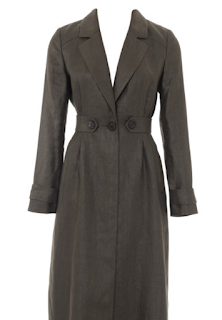 I am still thinking whether I want to do it with black gabardine I already have in stash  which seems rather heavy or whether I prefer buying some more suitable fabric specifically for this project. 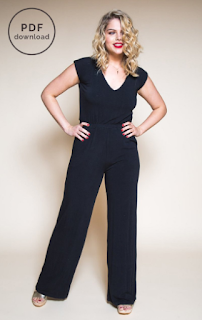 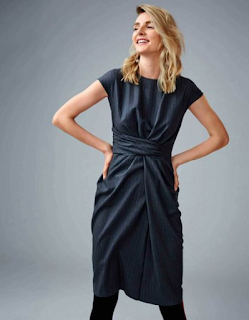 It might also be wise to find a few projects for using up scraps and little fabric remnants. I actually have 13m of fabric in pieces under one meter which means that they need to be combined together or used for some little projects. (I can sew up a summer dress from 0.8m if the pattern is simple and no pattern matching is required).

And that's basically it; I know I will continue buying some fabric, I just need to keep the numbers in check and hopefully, I will also learn some new techniques on the way ;o)

I have written this post almost two weeks ago but still did not get to posting it, so trying now before it is the end of 2019 ;o)

I am always very positive about the past years, but 2018 was an exceptional one. In backsight, nothing very exceptional happened for me but I was happy all the year and that is what counts. I wanted to change job this year and I did and in the end it was even easier than expected. I now have a longer commute but seem to cope with it quite ok. I also work longer hours, so of course, it eats into my weekday sewing time (so I sewed less at the end of the year), but I am pretty excited about the new job, and I use my commute time for more reading which is also a good thing.

In terms of sewing and stash busting, I was slightly less productive; I bought the same fabric amount as last year, but sewed less, so my end-of-the year totals are not so impressive. Last year numbers might also come from sewing the large patchwork which ate meters of fabric. I have however reduced my stash to 100m, so even though the year goal was 90, I am not complaining.
I was happy to sew some very old stash pieces (always a good thing), sometimes even rather surprising. Also, I managed to force myself to buy only fabric with a specific intent (lining fabric excluded) which helped to sew quickly new purchases. 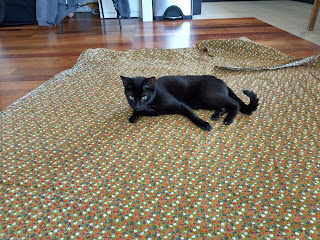 What threw me off the wagon was learning to sew jerseys (and sewing the dancing stuff for my sister; yes, it is all her fault!), cause I had to buy all the fabrics for that, and more afterwards. However, I do not regret it at all, because I really expanded my sewing skills there. The good thing is that sewing the little jersey tops used up all the little fabric scraps. The same can be said for the baby clothes sewn for X-mas. 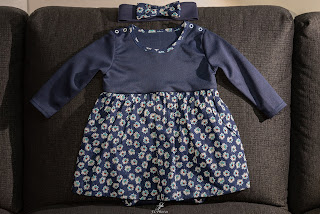 On the other side I sewed two jackets (yet to be blogged) and a coat - probably my biggest achievement this year! 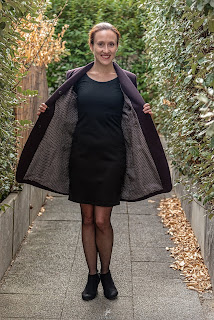 In terms of selfless sewing, I created
14 pieces for my sister, see how lucky she is!!!!
3 baby pieces
1 pyjama for my sister's boyfriend

In addition to that, I created 2 UFOs and muslined a pair of trousers and culottes which I did not like, so I let them for some other time.

As for pattern companies used, this is no surprise:
28 Burda patterns
2 Butterick
2 Knipmode/Fashion Style
3 Closet Case Patterns
2 New Look
2 Simplicity
I guess I should get Burda subscription at some point of time :o)

Note: the funny thing with Burda is that when looking at each new number, I rarely find something I REALLY REALLY like so as to justify buying the number. But then I read a few reviews and realize that there might be some jewels and reconsider. But then 2 month later I decide to sew something, find the pattern and realize it is from a Burda magazine I had decided not to buy :o)
I might think of subscribing and then joining the Burda challenge (sew one thing from each Burda), we'll see....

So in the end, it was a productive year. I managed to replace some more RTWs by me-mades (I just do not like my RTW coats anymore now I have my own; I still keep wearing the black one, since my violet coat is not a thick winter one, but I already have fabric for its replacement). Also, I found out that sewing jerseys is not so difficult, especially when using stable knits like ponte and wearing them is kind of fun and comfy. 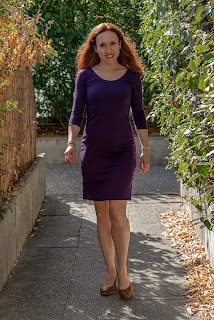 And just because I can (and had some fabric remnants), I sewed some more x-mas gifts for my sister.

There is probably nothing new under the sun in these makes, but I like to document all my makes here, so there we go.

First, there are long trousers for the hippo pyjama because:
- I still had some of the fabric ad it would be real pity to use it only for muslins
- it can be quite cold in a place where my sister lives 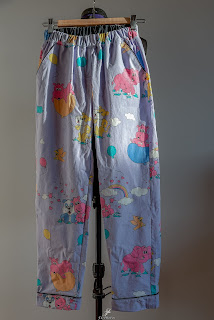 Now I can say there are no more hippos left, I even had to cheat little bit and use black cotton remnants on some interior pieces.

My ignorance of pattern matching on this make resulted in a really strange creature, though... 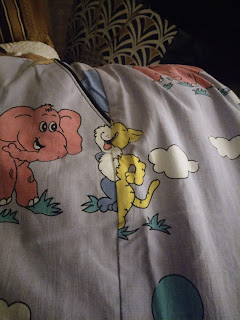 Then there was a piece of this blue poly fabric. I totally hated even touching it, it really has this plastic feel (I might be exaggerating little bit), but my sister loved it from the beginning and I must say it has a nice bounce back) Therefore, there was no way I would keep that in my stash. 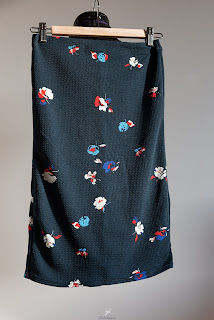 I sewed a simple skirt, just added little bit of volume on the lower hem. It gives the skirt a nice silhouette and it is easier to dance in it. 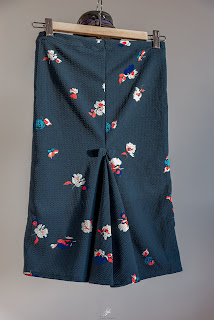 The last make was a jersey dress made from the same pattern as this blue one. I just happened to order this red jersey which was not the right colour for me but nice for my sister, so there we go, whipped up in no time, since I now know it quite well.
The only mistake I made is omitting the back slit which apparently exists on the blue dress, even though I cannot see it in the pictures :o) 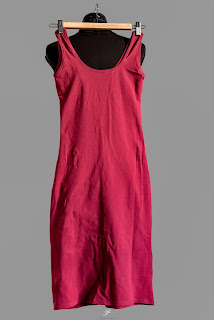 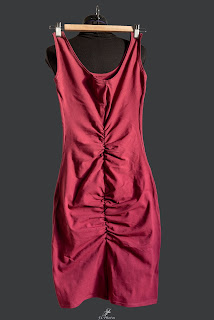